Difference Between T Cells and Antibodies 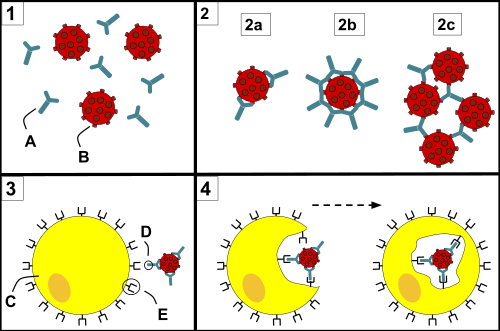 T cells are one of the types of lymphocytes that develop in the thymus. Antibodies are proteins made and released by B cells against foreign pathogens.

What is T Cells?

T cells are a type of white blood cell called a lymphocyte, which is formed in the blood but develops further in the thymus and plays a role in the immune system.

There are several types of T cells that are made, which work together with each other and with the B cells to bring about a cellular immune response. There are helper T cells, and cytotoxic T cells. The helper T cells stimulate B cells to release antibodies, and also trigger the activity of macrophages, which literally consume foreign pathogens. The cytotoxic T cells kill pathogens that are marked with particular proteins and are very specific in their action.

Formation in the body:

The T cells are a type of lymphocyte that is initially created in the bone marrow from hematopoietic stem cells. The initial cell that is produced moves to the thymus gland where it then differentiates into one of the types of T cells of the body.

A T cell varies in structure depending on what specific type it is, but all of these cells have special proteins on the cell membrane called T cell receptors. These receptors are often complex structures consisting of several polypeptide chains.

The T cells are a class of lymphocytes that function in the cell-level immune response of the body. Generally, this means a specific response which is triggered when a pathogenic bacteria or virus is detected by the immune system. Specific types of T cells have particular functions, with helper cells activating other cells of the immune system while cytotoxic T cells directly kill foreign cells and viruses. T cells are related to antibodies in helping in the cellular immune response.

An antibody is a protein known as an immunoglobulin, which attaches to antigens or inhibits pathogen movement or protein synthesis in some way.

There are five categories of antibodies that occur; these are called IgA, IgE, IgM, IgG and IgD.  These vary in terms of structure of the chain part of the molecule, and in the location and specific function in each case. Of all the types, IgG is the most abundant, making up about ¾ of all the antibodies, while IgE is the least abundant antibody.

Formation in the body:

Antibodies are chemicals that are formed and released by B cells of the body. These lymphocytes are closely related to the T cells since they also originate in the bone marrow from stem cells and some of the T cells work in conjunction with B cells by triggering the release of antibodies during an immune response.

An antibody is a protein molecule that consists of about four polypeptide chains and various chains, some of which have specific regions that are designed to attach to antigenic substances.

Antibodies can disable pathogenic microbes by attaching to the antigens on the organism itself; this then causes the organisms to clump together and thus they can no longer function properly. Another way antibodies work is to slow down the movement of a pathogen, e.g. HIV virus, or even paralyze a pathogen or disrupt the proteins formed on the viral capsid; this has been noted for the virus that causes foot-and-mouth disease.

Difference between T cells and Antibodies?

T cells are a type of white blood cell called a T lymphocyte. An antibody is a protein called an immunoglobulin, which binds to antigens or helps stop functions of pathogens through disrupting certain processes.

T cells are produced from stem cells in the bone marrow which later differentiate in the thymus. Antibodies are chemicals that are formed and released from specific B cells in response to a signal from a T cell.

A T cell is a type of lymphocyte that has T cell-type receptors on the plasma membrane of the cell. An antibody is a protein that has various chains, some of which are modified for attachment to antigens.

The function of T cells is to help with the cellular-response of the immune system, and in fact, helper T cells activate B cells to release antibodies; cytotoxic T cells directly kill pathogens. The function of antibodies is to attach to antigens of pathogens, but some can also inhibit movement of pathogens, or paralyze or inhibit protein synthesis in viruses.

Summary of T cells Vs. Antibodies