Difference Between Alzheimer’s Disease and Dementia with Lewy Bodies 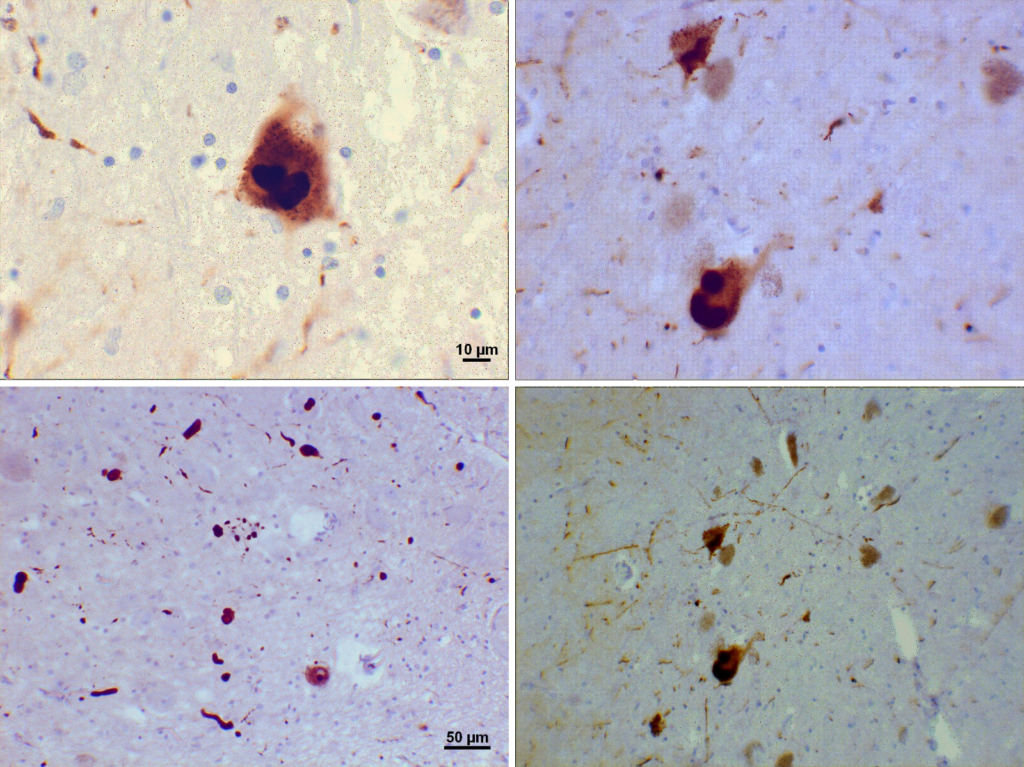 Both Alzheimer’s disease and Dementia with Lewy Bodies are gradual, progressive brain disorders which share hallmark brain changes- amyloid plaques and neurofibrillary tangles. Thus, these common types of dementia have similar symptoms such as memory loss, confusion, delusion, movement difficulties, and other behavioral changes. However, Alzheimer’s disease and Dementia with Lewy Bodies have certain differences regarding prevalence, median survival time, antipsychotic medication sensitivity, and several symptoms. Such distinctions are further discussed below.

What is Alzheimer’s Disease?

Alzheimer’s disease is a gradual, progressive and irreversible brain disorder characterized by the wasting away of brain cells. The early symptoms of this most common cause of dementia include difficulties in remembering recent conversations and events, coming up with the right word, and in organizing thoughts. The memory loss in this condition worsens overtime; specifically, patients may often repeat questions and conversations, routinely forget appointments, and misplace things in illogical places. In the middle-stage, patients may feel irritable or withdrawn when faced with cognitive tasks, may not remember their personal details such as phone number and address, may feel confused regarding time and location, and may exhibit personality changes (e.g. delusions, compulsions, and suspiciousness). During the late-stage, patients require daily assistance, lose awareness of their surroundings, have difficulties in communicating, exhibit marked decline in physical facilities like walking, sitting, standing, and eventually swallowing. The symptoms usually appear in the mid-60s; in rare cases, they may occur between the 30s and mid-60s. There is no treatment for Alzheimer’s disease; however, medications may help reduce some of the symptoms. The specific cause of Alzheimer’s is not yet fully understood; it may be due to a combination of age-related brain changes, hereditary influences, and environmental factors.

This condition is named after Alois Alzheimer, a German psychiatrist and neuropathologist, who first identified the disease in 1906. He examined the brain of a patient who had unusual symptoms like unpredictable behavior, memory loss, and language difficulties. Dr. Alzheimer noticed that the brain exhibited abnormal clumps or plaques and tangled fibers. Subsequent studies have then found out that the initial damage takes place in the hippocampus which is responsible for memory. As the disease progresses, other parts of the brain deteriorate and by the final stage, the brain will have shrunk significantly (National Institute on Aging, 2017).

What is Dementia with Lewy Bodies?

Dementia with Lewy Bodies (DLB) or Lewy Body Dementia (LBD) is characterized by a progressive decline in cognitive abilities and independent functioning. The symptoms include changes in thinking and reasoning, delusions, confusion, hallucinations, sleep disturbances, and memory loss. Moreover, patients exhibit both dementia and movement symptoms such as slowness, gait imbalance, rigid muscles, tremor, and a shuffling walk. DLB is estimated to be dementia’s third most common cause as it is responsible for five to ten percent of cases (Alzheimer’s Association, 2020).

This condition is due to the buildup of Lewy bodies which are spherical masses of protein that develop inside nerve cells. These were discovered by Frederic Henry Lewy, a Jewish German-born American neurologist, who worked in Dr. Alzheimer’s laboratory in the early 1900s. The risk factors include age (being older than 60) and genetics. DLB has no cure; however, medications may be prescribed to treat individual symptoms.

Difference between Alzheimer’s Disease and Dementia with Lewy Bodies

A study found out that the median survival time among participants with Alzheimer’s was 84.6 years old while that of the participants with DLB was 78 years old. This difference of more than six years was suggested to be partially due to the falls and injuries which were more closely associated with DLB patients (Williams, Xiong, Morris, & Galvin, 2006).

Unlike patients with Alzheimer’s disease, those with DLB are more prone to experience side effects when given antipsychotics. Some of them reported increased parkinsonism, immobility, and sedation. In addition, neuroleptic malignant syndrome, which is characterized by fever, rigidity, muscle tissue deterioration, renal failure, and death, are one of the serious side effects (Lewy Body Dementia Association, 2020).

Regarding Alzheimer’s disease, the marked decline in physical facilities like walking, sitting, standing, and eventually swallowing occur during the late-stage. As for DLB, the early symptoms include gait imbalance, rigid muscles, tremor, and a shuffling walk.

As compared to Alzheimer’s disease, the visual hallucinations in DLB tend to be more prevalent and occur earlier.

gene Brown
Jean Brown is a Registered Psychologist, licensed professional teacher, and a freelance academic and creative writer. She has been teaching social science courses both in the undergrad and graduate levels. Jean has also been a research adviser and panel member in a number of psychology and special education paper presentations. Her certifications include TESOL (Tampa, Florida), Psychiatric Ward Practicum Certification, and Marker of Diploma Courses.
Latest posts by gene Brown (see all)
Share Tweet Pin Mail SMS
Categories: Disease, Health, Science
Tags: Dementia with Lewy Bodies
previous post Difference Between Furlough and Layoff
next post Difference Between UI and UX