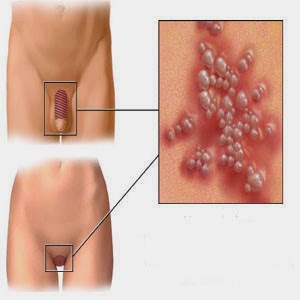 Ingrown hair and genital warts though similar to each other in appearance, greatly differ in all other aspects. Ingrown hair are hair that curl inwards or grow sideways into the skin. Genital warts, also called condyloma accuminata or venereal warts, are symptoms of a highly contagious sexually transmitted disease caused by certain types of human papilloma virus (HPV).

Ingrown hair occur due to shaving, waxing, very tight clothing or due to any such procedure that causes uneven breaking of hair with sharp tips. Subsequent shaving forces these hair underneath the surface of the skin. Ingrown hair are more prevalent in people with curly or coarse hair.

Ingrown hair produces a reddish bump over the skin which looks like a pimple. In men they affect the cheeks, chin and neck. In women, ingrown hair develop on the lower limbs, pubic region, and armpits. The common symptoms are itching, hair that remains in spite of shaving. Ingrown hair are never a serious condition but can become irritating and embarrassing when they leave behind darkened skin or scars.

Genital warts affect men as well as women. Following exposure to HPV virus through sexual contact with an infected partner, a latency period of few weeks to few months persists during which the warts do not become externally evident. Genital warts are painless, itchy and bleed only rarely. The common areas affected are penis, urethra, scrotum, vulva (outer part of female genitalia), labia majora (outer folds of vulva), vagina, cervix and area around the anus. These warts range from 1mm to several centimeters in size when many join together. Genital warts could be soft or hard and some appear cauliflower-like.

Ingrown hair resolve on their own when left untreated. They can be removed with tweezers or by producing a small nick at the site of the hair with a needle or scalpel to release the hair. When ingrown hair get infected, anti-inflammatory drugs and antibiotics may be required. Close shaving or applying too much force while shaving should be avoided.

Genital warts are diagnosed by their location and appearance, but investigations like magnification of the area, biopsy, Pap smear in females etc. can be carried out to aid diagnosis. Apart from certain medications, techniques like freezing, laser treatment and surgical removal are used to treat genital warts. However, there is no cure for genital warts and the above mentioned modes of treatment only cause temporary disappearance. Genital warts recur after an interval of few months to few years.

Ingrown hair arise from a mechanical cause like shaving and waxing causing hair to grow beneath the skin resulting in a boil like sore. They resolve on their own unless they get infected which calls for use of antibiotics. Genital warts are caused by human papilloma virus which is transmitted through sexual contact. These warts may not be noticed for several years as they are painless and rarely bleed. There is no cure for genital warts. They disappear after taking medicines or surgical removal only to reappear after a few months.